Let’s go for step 1 : installing the game.
Take your dusty cdrom and insert it into your drive.

Now search the cdrom for a file called INSTALL.EXE, or SETUP.EXE, something like that.

Some games had to be installed on windows, some directly in DOS. So how to know easily ?
Just launch the installer, and if it doesn’t work, you have to install it through DOS.

Note :In some cases, the game was designed for an older windows version, in which case you have to launch the install using a compatibility mode. This can be done within Windows XP and probably with windows 7 and 8 as well, but I will not detail the manipulation here.

On the Rayman by his fans cdrom, the installer is located under your_cd\Fan\SETUP.EXE and it can be launched directly from windows !

It is easy to install a game through DOSBox if you need to : your cdrom drive must be identified by a letter, such as “D”.

For example, the install path here is D:\Fan\SETUP.EXE, so you will have to enter some command lines just as follows (explained underneath) : 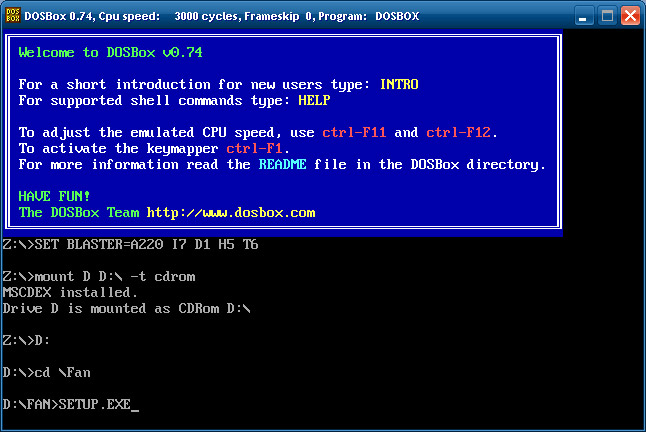 launch the installer located in that folder

The installation should start (if the game must be installed from windows, there should be an error message in DOSBox, like “This program requires Microsoft Windows”, which is the case here).